Depending on where you live in the world, it's not always easy to take your bike out onto the roads, or to cycle out in the wild lands. Especially during winter months where it can become dangerous, icy or even wet and cold.

Bike trainers, or turbo trainers as they are sometimes called are great alternatives. Today we are going to look into Magnetic Bike Trainers, explain what they are, how to use these machines, what actually makes them what they are and also find a few places that you can purchase these things.

If you haven't already, be sure to check out our latest reviews on all kinds of indoor bikes trainers.

What Is A Bike Trainer or Turbo Trainer?

Bike trainers are a clever little invention that allows everyday cyclists, pro cyclists and even beginners to use their normal bicycle, be it a mountain, road  or specialist bike to cycle anywhere they like.

They fall into two main categories, depending on your budget, requirements and even overall surroundings. You will find electromagnet bike trainers, which we will explore today, and fluid turbo trainers, which can be seen here. 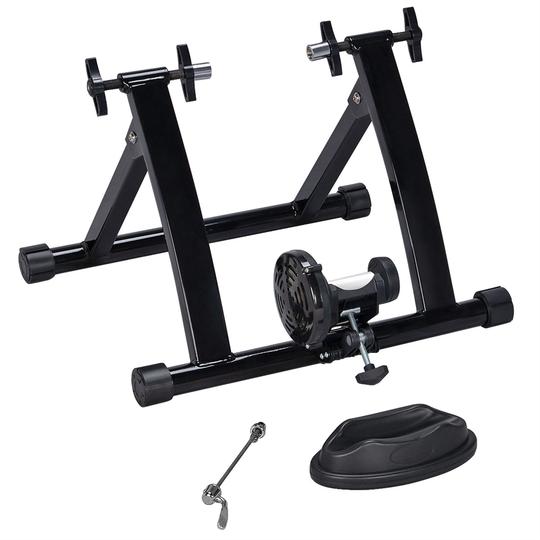 Usually they are U or V shaped frames that can be set up anywhere (as long as you have room to place a bike), in which your bike can then be place, usually locked into position, and then used.

Thankfully, they don't require a lot of set up, and most of them can be assembled in a couple of minutes, without the need for additional tools or the requirement to remove your wheel. Though this can depend on the turbo trainer being purchased.

The reason for people using these products is because they can to a certain extent mimic the feel of being on a road, or being out doors, without the need to go out when it's throwing it down with rain or trying to whip up a hurricane.

You also don't have to purchase a stationary exercise bike, which can feel clunky, fake or even just boring.

What Is A Magnetic Bike Trainer?

As previously mentioned, turbo trainers will fall into 1 of 2 categories, and the difference in them can be noticeable, especially at the higher ends of the value spectrum.

The electromagnet resistance trainers, or magnetic ride trainers work by having spinning magnets running around a fly wheel, connected to a metal tube, on-which your bike wheel is placed. These magnets are used to increase the resistance on which you cycle.

These kinds of turbo trainers are great for everyday users, especially if using a hybrid style bike or mountain bike, as they generally stick to lower gears and lower speeds.

They are also usually cheaper than their alternative fluid based trainers, but can also be louder and can be prone to breaking more or even overpowering the resistance mechanism.

How Does A Magnetic Bike Trainer Work?

The magnets found within the back housing section essentially increase the resistance, or decrease their resistance, thus increasing or decreasing the amount of effort required to roll the tube that your bike wheel is placed upon.

Most mag ride trainers will have a handlebar mounted cable, that allows for changes in resistance, much like a bike gear selector.

As you click through the different resistance levels, the magnets are becoming closer, increasing the amount of effort required to use it.

For cheaper models you may find that they don't provide cables, and require the manual setting of resistance, and even placing of your bike wheel. This can be a royal pain in the arse.

How To Use A Magnetic Bike Trainer?

To be honest, they are pretty quick and easy to set up, which is one of the reason we have grown to love turbo trainers so much over the years. 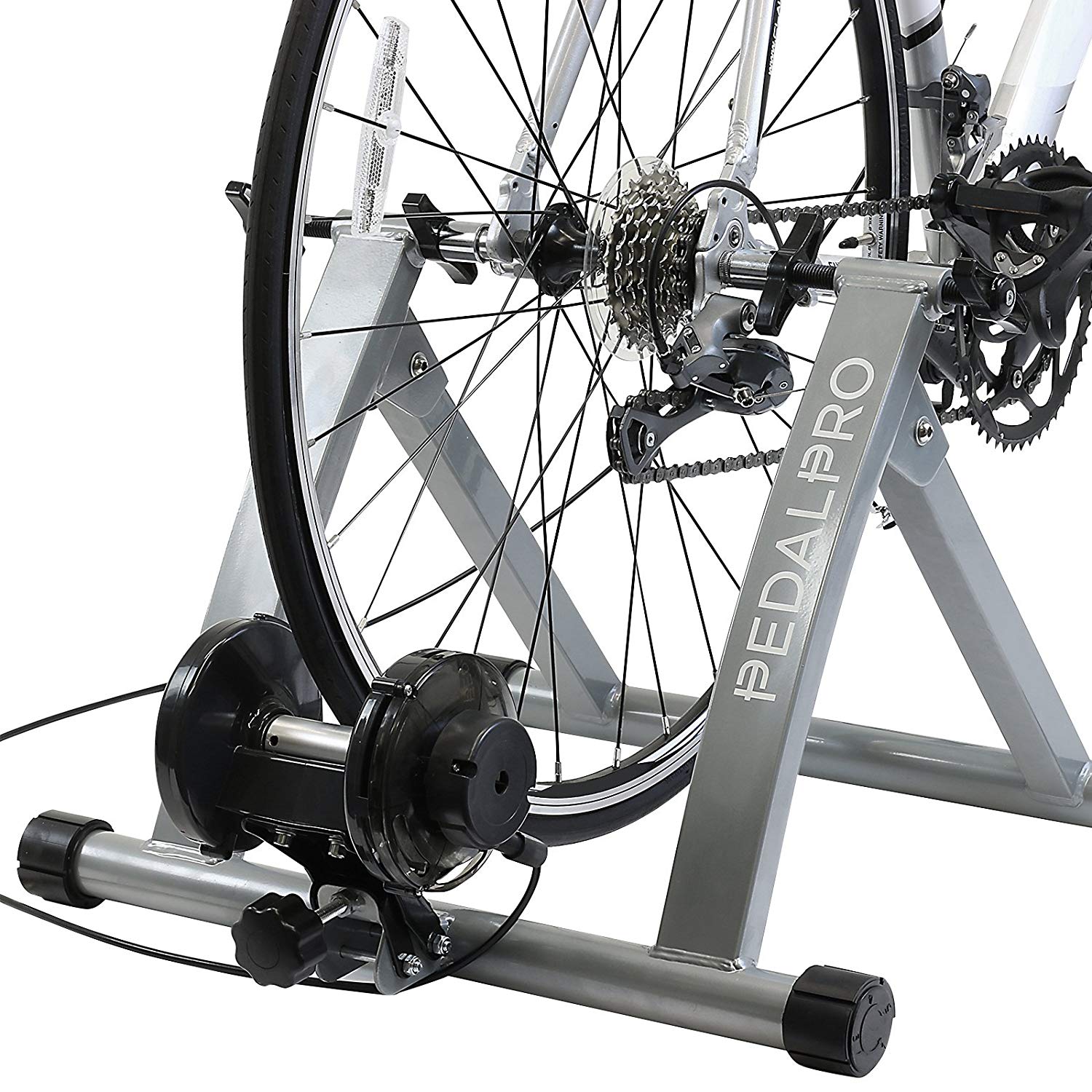 The large majority of magnetic trainers follow quite a similar design. With 2 individual holding rods either side of the frame.

Depending on the frame, or the type of bike you own, you can usually slot your existing wheel in, without needing to change out the type of wheel you run, the size of the wheel or the wheel spindle either. Some do require a change in the wheel spoke, but thankfully most don't.

Again, depending on the quality of the trainer, you will also find either a screw or leaver designed to help you put the fly wheel as close to your wheel (you want it just touching).

This is to allow for different size wheels and tyres when locking your wheel in place. So are slightly better designed than others, or allow for a much more precise movement of the mechanism.

Once the bike is locked in place and you have moved the fly wheel and the roller into place, you are ready to go. Some will have handle bar wires, others require getting off and changing the resistance, but either way, it's time to ride.

Are Magnetic Bike Trainers Any Good?

We have found that most mag ride bikes are better suited for those just starting out, have a lower budget and don't mind a little bit of noise (though you can reduce that noise).

You can find varying degrees of bike trainers, from cheap and cheerful, to high end, multi use and specialist magnetic ride bike trainers, and usually, the more you pay the better the fluidity or quality of the resistance.

Higher end ones tend to be quieter, have higher quality mechanism and magnets, and generally work better over long periods of time, especially when heat gets involved which can cause resistance to reduce.

There is also a 'discussion' happening around which one is better, mag or fluid, and I doubt it will ever stop, as there are advocates for both.

Fluid bike trainers do tend to be quieter, and for those who are quicker, or using racing bikes will overall work better. The resistance increase as your speed increases and it feels a lot more natural, plus you can't really go over the natural resistance higher end that the mag rides will have.

But, fluids are usually more expensive and can be expensive to fix or annoying to sort out if they break (and they are prone to leaking unless you want to spend some serious change on them).

If you are looking for a turbo trainer that allows you to train in the winter, while still offering some level of reality, then magnetic bike trainers are a great starting place.

They are not stupidly expensive, allow you to use your current bike and can even be stored away easier than say a stationary exercise bike.

Most of them will not feel as natural as a fluid trainer, or actually being out and about on the open road, but they will come close, and it allows you to keep training, or stay in shape, then that's a pretty big win in our eyes.